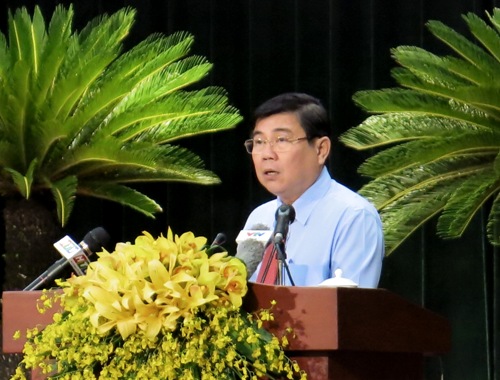 Mr. Nguyen Thanh Phong thanked delegates of HCMC People’s Council (session VIII) and voters for choosing him as new chairman of the city – a big city of the whole country and a driving force for Southern key economic region with important political and strategic position.

“This is a big honor for me and a big responsibility entrusted by HCMC Party’s Committee, People’s Council to uphold important achievements of HCMC after 40 years of construction and development, especially those in fields of society, economy, national defense, external affairs, global integration, improvement of quality and efficiency of government operation, contributing to the effective performances of the whole country in 2015 and in the period of 2011-2015”, said Mr. Phong.

He thanked Mr. Le Hoang Quan (former chairman) and permanent members of HCMC People’s Council for sharing, supporting him to finish his important missions in the period of 2011-2016, successfully implementing the Resolution 2016 of Party’s Committee and People’s  Council, creating a strong motivation for the city to complete its important tasks: building a modern-civilized-sentimental city.

He commented that in 2015, although the city faced lots of difficulties and challenges but authority and people of HCMC has continued to promote the traditional solidarity, dynamism and creativity to basically complete its targets of socio-economic-cultural development in 2015, contributing to the socio-economic – cultural development plan in 2011-2015 and the Resolution of the 9th Party Congress of HCMC.

However, the competitiveness of HCMC is still modest, he said, weak urban development and management, unsolved flooding and traffic jams. Besides, the city is very slow in applying science and technology into production, water management is still limited, quality of vocational training fails to meet demand of enterprises. Some problems in fields of urban areas, culture, education, health, employment, food safety and hygiene are not well resolved. Traffic accidents, fires and explosives, complaints or denunciations, etc., are still very complicated. Additionally, administrative reform has not met the requirement, there remains bureaucracies, harassments in some localities, agencies.

There are many causes but mainly from subjectivism. Complicated and unpredictable changes of the world and the region have impacts on socio-economic development of the city. The city has not promptly removed difficulties for production activities or supporting enterprises through investment stimulus program and talent attraction for sustainable development. Coordination between departments, agencies is insufficient for upholding social resources. Some units cannot be able to grasp practical situations, some cadres and party members are still afraid of responsibilities, causing harassments to people, added Mr. Phong.

According to Mr. Phong, in 2016-2020, he will focus on solving key missions for sustainable development of HCMC including: implementation of the Instruction 01-CT/TU dated December 4 2015 of the Party Standing Committee,  implementation of the Resolution of the 9th Party Congress of HCMC (2015-2020), completion of the plan of implementation of 7 breakthrough programs of the Resolution of the 9th Party Congress, restructuring economy of HCMC, enhancing growth quality and competitiveness, effectively using investment capital, improving quality of human resource attached with scientific and technical development, applying technical advances into production, improving business climate, improving national competitiveness in 2015-2016, simplifying administrative procedures, improving investment environment, attracting foreign investment in fields of environmentally friendly hi-tech, improving PCI, PAPI, PAR indexes of HCMC, promoting inter-regional connection, developing supporting industries, improving food safety and hygiene and well implementing its duties as chairman of the Council of Southern key economic zone in 2015-2016.

Implementation of a breakthrough program on administrative reform, making it a democratic-professional-modern-dynamic one, cutting down the staff of the State’s apparatus, applying IT into operations of the State’s agencies of HCMC, practicing thrift in using the State’s budget, combatting corruption and bureaucracy, solving complaints and denunciations, strengthening direct dialogues with local people, enhancing openness, transparency and public service morality, promptly handling violations, securing national defense-security, remaining political stability and social order.

Mr. Phong promised to try his best to complete his tasks in his tenure, to study experience from previous leaders, to make it beneficial to people regardless of difficulties, to build up a united, creative team to effectively implement key programs and plans of the Resolution of the 9th Party Congress of HCMC and 2016-2020 economic plan, to build HCMC a modern-civilized-sentimental one with better living standard, to make HCMC a big economic-financial-trade-scientific-technology center in the Southeast Asia.